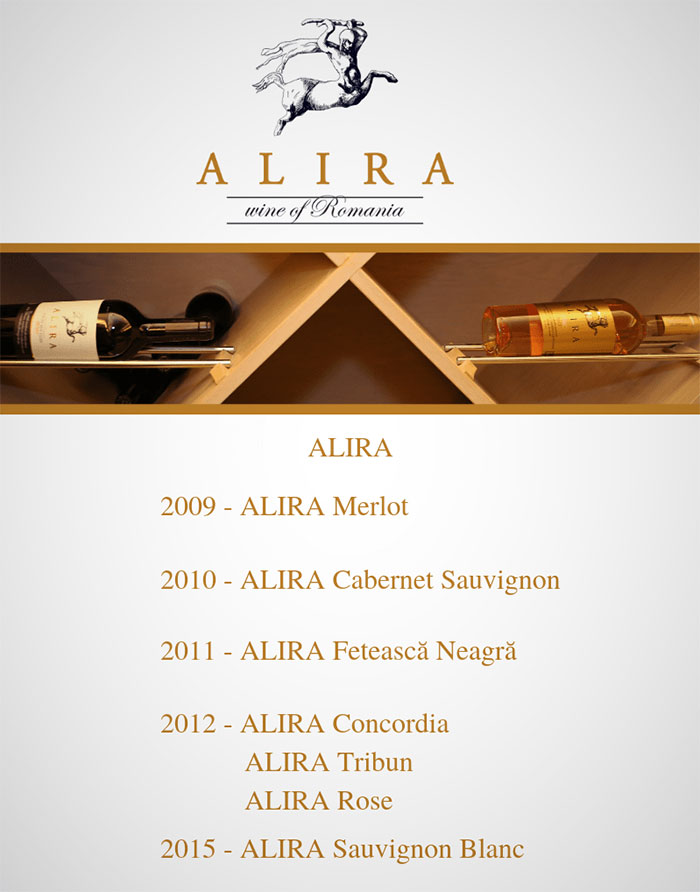 The Alira Collection represents an introduction to the essence of the place and brings together the wines created as a definition of each variety grown on the Aliman hills and vinified at Rasova.

The first wine created by oenologist Marc Dworkin was Merlot in 2009, from just 20 hectares. The story continued with Cabernet Sauvignon in 2010, followed by Feteasca Neagra in 2011. Thus, since 2012 these wines have been available on the market, both as monovarietal wines and as assemblages under the names Tribune and Concordia. The rose created from these grapes has become emblematic for Alira, and is a favorite of the public.

Starting in 2015, the range has expanded with the first white wine, a Sauvignon Blanc.

This website uses cookies to improve your experience while you navigate through the website. Out of these, the cookies that are categorized as necessary are stored on your browser as they are essential for the working of basic functionalities of the website. We also use third-party cookies that help us analyze and understand how you use this website. These cookies will be stored in your browser only with your consent. You also have the option to opt-out of these cookies. But opting out of some of these cookies may affect your browsing experience.
Necessary Always Enabled
Necessary cookies are absolutely essential for the website to function properly. This category only includes cookies that ensures basic functionalities and security features of the website. These cookies do not store any personal information.
Non-necessary
Any cookies that may not be particularly necessary for the website to function and is used specifically to collect user personal data via analytics, ads, other embedded contents are termed as non-necessary cookies. It is mandatory to procure user consent prior to running these cookies on your website.
SAVE & ACCEPT
×